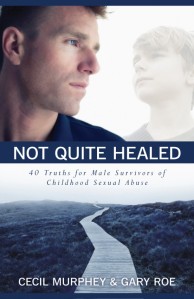 I know you may be thinking…I thought this was a women’s show? Well, it is (even though I have growing numbers of men who listen in as well). And here’s why I believe this is a subject we cannot avoid discussing.

I’ve asked Gary Roe to join me this Saturday for the 8/10 edition of Always Faithful, because he is one of the most credible authors I know on the topic. He is a survivor, and a servant-leader who is committed to helping others heal.

As you’ll see below, the stats show 1 in 6 boys are sexually abused before the age of 18, but further down you’ll see that boys/men tend NOT to report their victimization. So what does that mean to you, a woman? That means chances are high that you are either married to, a sister to, a cousin to, an in-law to, a daughter of, or a friend of an adult male who was victimized as a boy. Some of them may not even be aware of the abuse, since the memories often do not surface until later in life.

So, I want to invite you to join Gary and I this Saturday from 11AM to Noon CST on AM 630 KSLR or streaming live on the web at www.kslr.com. And please, help me pass the word. Share this post on your social networks and tell your friends to listen in. We, as women, need to understand how this kind of wounding affects the men in our lives, and know how to protect the boys in our care.

After the show Gary and I will be “continuing the conversation off the air” at El Jarro’s Mexican Restaurant at 281 and Bitters…I hope you will join us!

Gary speaks and writes from more than 30 years of ministry, including campus ministry, church-planting in Japan, discipleship-training in Hawaii, and three pastorates in Texas and Washington. He now serves as a hospice chaplain, writer, and speaker in central Texas. He is the co-author (with New York Times Best-seller Cecil Murphey) of Saying Goodbye: Facing the Loss of a Loved One (Harvest House, 2013) and Not Quite Healed: 40 Truths for Male Survivors of Childhood Sexual Abuse (Kregel, 2013). He is also the author of Good Grief, a free web-based grief recovery course available through his website. He writes inspirational columns for several Texas newspapers and also contributes regularly to Shattering the Silence, Cecil Murphey’s blog ministry for sexual abuse survivors. Gary has three adopted daughters from Colombia who are also abuse survivors, and absolutely loves

How prevalent is child sexual abuse?